Be among the first to own a unit at Westmont Club Residences, White City Living The dusk pool at the rooftop on the 11th floor. All photos: White City Living.

Singapore buyers who want to invest in a growth area in London should look no further than White City Living. The upscale development at the rejuvenated White City is located at the northern part of Shepherd’s Bush, in the Borough of Hammersmith and Fulham in West London.

Surrounded by restaurants, bars and leisure facilities, White City Living is home to over 2,300 apartments, as well as some 60,000 sq ft of mixed-use commercial space and eight acres (3.2ha) of open green landscaping, including a new five-acre public park.

Westfield, the biggest mall in Europe with over 300 shops, and the new GBP3 billion ($5.5 billion), 23-acre innovation campus of the prestigious Imperial College are at the doorstep of White City Living. The attractions of Holland Park, Notting Hill and Kensington are also within easy reach.

The indoor residents' lounge on level 11. The residents' lounge on the ground floor.

At the rooftop of the two towers is the Mediterranean-inspired Beach Club on the 11th floor. At the club, residents get to enjoy an infinity pool, man-made beach, an olive grove, private dining, indoor and outdoor lounges, as well as a bar. Beyond the exclusive Beach Club, other facilities include a swimming pool with sun terrace, gym, spa, yoga studios, cinemas, entertainment suites, 24-hour concierge and residents’ lounges.

The olive grove, in keeping with the development's Mediterranean theme.

Beyond that, residents also get to enjoy access to White City Living’s recently completed Home Club, which comes with over 20,000 sq ft of space for work, meetings, social gatherings and other leisure activities. It features a swimming pool with an adjoining sun terrace, fully equipped gym with four personal training rooms, two 12-seater cinemas, a café and private dining room with kitchen.

In the White City area, there are over 100 restaurants, cafes and bars within close proximity to the development. This includes White City House by Soho House, which is within walking distance. 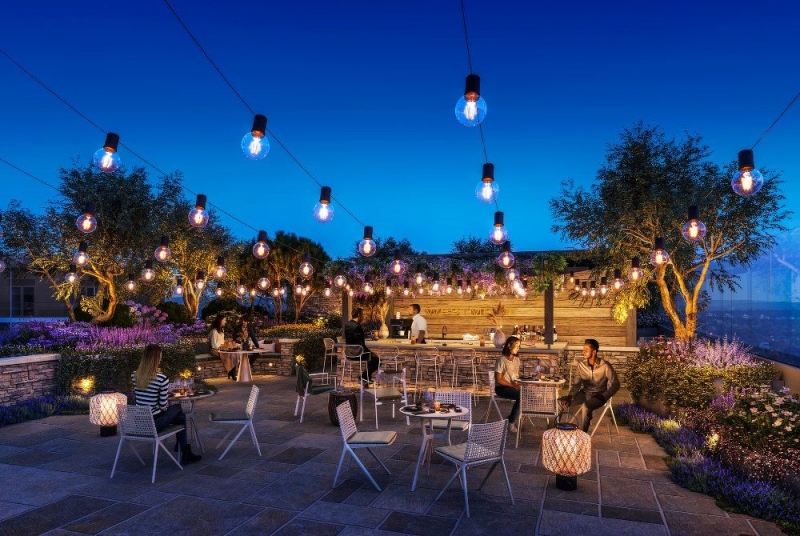 The rooftop bar and terrace.

“With a rooftop beach club and expansive resident facilities, Westmont is a place like no other and provides a lifestyle rarely found in London,” says Neil Ramsdale, managing director at St James. “It adds an important new chapter to White City Living, building on the success of what we have already delivered, including the extensive Home Club which is now fully open to residents.”

Westmont comes with a 10,000 sq ft commercial space and 185 homes for Imperial College key workers to support the growth and development of the new innovation campus adjoining White City Living.

Besides Imperial College, Royal College of Art White City is within a six-minute walk from Westmont too. Within a 30-minute tube ride are other top universities such as University College London, London School of Economics, Imperial College South Kensington and King’s College London. The Notting Hill Prep School and St Paul’s Girls School are within a 10-minute drive from Westmont. The beach and the pool overlooking the buildings.

At the entrance of Westmont are the White City and Wood Lane Underground stations which provide easy access to Central London via three train lines, namely Central, Hammersmith & City and Circle Lines. This means that London’s West End is less than 15 minutes away, and Hyde Park a mere 1.5 miles (2.4km) away.

“White City is fast emerging as a new hub for global innovation and education, and being a part of that is incredibly exciting,” says Ramsdale of St James. “Living here means you get to be a part of that energy and creativity, whilst central London is just minutes away, thanks to the outstanding local transport connections.”

The beach pool with a view of the sunset.

“White City Living by St James of Berkeley Group is my best-selling project in London,” claims Doris Tan, regional director at Benham & Reeves, which is marketing the project in Singapore. “It is well located, well connected and well planned.”

The latest phase, Westmont, comes with a rooftop beach club – “first ever in London” – according to Tan. This will give Singapore investors “a unique opportunity to be part of this exciting West London growth story”, she adds.

For more information, go to https://www.benhams.com/london/white-city-living-westmont/.

Hello, my name is Kaylee Toh, a real estate consultant at Huttons Asia Pte Ltd with years of experience. My areas of expertise include condominiums, HDB, landed properties as well as commercial and office space. I understand that each of my clients has different needs and requirements and I treat everyone with the highest degree of service and professionalism. My only purpose is to deliver successful results!  ... Read More